The company has been awarded a $1.3 million contract to provide the technology to the Saigon Water Corporation’s Tan Hiep Water Treatment Plant 2 in Vietnam’s capital, Ho Chi Minh City. Under the contract, Xylem will design, install and commission an expansion of the existing treatment plant, to include the first ozone treatment application in Vietnam. The upgrade will increase the plant’s productivity, enabling it to produce 300,000 cubic metres (m?) of drinking water per day, benefitting 15 % of the city’s population.

Ho Chi Minh City relies largely on rivers for its public water supply; raw water is taken from the Dong Nai and Sai Gon rivers, both of which are polluted by discharges from residential areas, hospitals, factories, waterway transport vessels, farms, and even garbage dumps*. Xylem’s Leopold Type S Underdrain and Wedeco SMOevo ozone system will be used to increase the capacity of the Tan Hiep Water Treatment Plant 2, a vital water treatment facility in the city.

The open loop Mitsubishi based heat pump system is the first installation of its kind anywhere in the UK that harvests naturally stored energy from the River Thames to provide thermal energy for an entire development. As the world faces a possible energy crisis, this has been heralded as being the solution to effectively managing and saving energy resources in the future.

Construction on the Tan Hiep Treatment Plant 2 upgrade began in Q4 2015 and the plant is expected to be operational by April 2016.

*According to a study by HCMC-based Institute for Environment and Resources, released November 2013 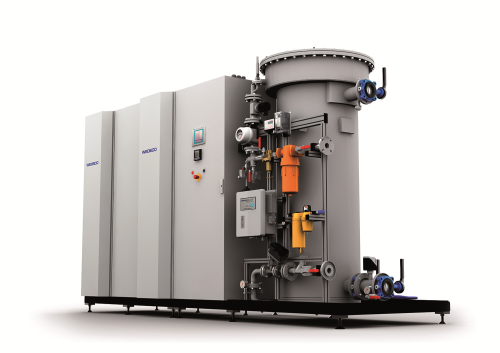 Subscribe for the latest industrial News and event update